Best Frozen Foods to Cook in an Air Fryer

Air frying is hands down the best way to cook frozen food! Quicker than oven baking, and the food always comes out crisp and perfect.

What are the best Frozen Foods for Air Frying?

Air fryers and frozen foods are a match made in heaven. Air frying is similar to oven baking, but for some frozen foods in particular, air frying will give much much better results than using a conventional oven.

Before we get to the best foods for air frying, first I want to tell you all exactly why air frying gives such great results with frozen foods.

Why is Air Frying so Good for Frozen Foods?

Air frying is ideal for frozen foods because of the quick cooking time along with the action of the hot air circulating around the food.

When you start cooking frozen foods, the food first begins to defrost before it can cook then finally start to brown (a.k.a the Malliard reaction).

As this process happens, the outside of the food will absorb some of the moisture. This can lead to soft or soggy foods if that moisture doesn’t have a chance to evaporate before the cooking process is complete.

This often happens when cooking frozen foods in a conventional oven, the slow cooking times and static air means that the food relies on heat alone to cook the food. This leads to either food that is cooked in the middle but still soft on the outside, or food that is crisp on the outside, but starting to dry out on the inside.

This is what makes air fryers so ideal for cooking frozen foods. The cooking time is faster than oven baking, which means there is less chance for the outside of the food to absorb moisture from the center, and also the action of the hot air circulating around the food means that any moisture that is present on the outer surface will be actively evaporated.

This means the center of the food stays moist, and the outside stays crisp, just as it is meant to be!

The best frozen foods I have cooked in my air fryer are hands down frozen hash browns.

I don’t know about you, but I never seem to be able to achieve evenly cooked hash browns with all-over crunch when I try to cook them in the oven. They always seem to remain slightly pale in the center while getting over cooked and dry at the edges.

I think this because they lay on a flat tray, some moisture is retained in the center on the under side of them during cooking. This means they don’t crisp up properly, even after they have been flipped.

Air frying removes this issue, because they sit in a basket, allowing the hot air to reach all surfaces, preventing any trapped moisture from preventing them from cooking properly.

Frozen hash browns cook perfectly in the air fryer every time, meaning we probably eat them waaay more often that we should!

Like hash browns, you will find that air fryer pizza rolls are the best you have tasted. For the same reasons I discussed above, hot air frying keeps the outside of the pizza rolls nice and crisp while they are cooking through.

Another benefit about air frying pizza rolls is that it takes a lot less time to cook them than oven baking. They cook quicker, but also you don’t have to spend the the time preheating a conventional oven as air fryers preheat in a couple of minutes (and some don’t even require preheating!).

That is a lot less kitchen time required before those pizza rolls are ready to eat!

Yeah sure if you are short on time you could microwave them, but they will not be crispy and delicious like they will if you cook them in the air fryer.

Egg rolls, spring rolls, or anything in an egg roll wrapper (like pizza logs for example) will give really great results if cooked in an air fryer.

When baking frozen eggs rolls in a conventional oven, as the egg rolls start to defrost at the start of the cooking process, the wrapper can absorb some of the moisture from the filling. This will often lead to oven baked egg rolls that are a bit soft or even downright soggy!

This doesn’t happen when cooking frozen egg rolls in an air fryer.

Firstly the egg roll wrapper doesn’t have a chance to absorb much moisture due to the quick cook time.

But also, and more importantly, any moisture that does get absorbed is dried almost immediately by the action of the hot air, keeping the outer wrapper crisp and perfect.

Similar to the options above, one of the reasons that air frying is so great for frozen pizza is that the hot air can get to all surfaces, allowing the base to cook properly without over-cooking the toppings (like so often happens when frozen pizza is cooked in a conventional oven).

Air fried frozen French Fries, steak fries (or oven chips to our readers in England!) will be the best frozen french fries you will ever taste. Guaranteed!

Okay, so maybe deep fried frozen fries might have a slight edge when it comes to taste, but air frying is much healthier as the fries do not soak up oil while cooking (yuk!).

Because the fries sit in a basket while air frying, the air and the heat can circulate around them fully, cooking all surfaces to crispy perfection! (though it is best to shake them once or twice during cooking).

The first time I tried cooking frozen fries in my air fryer I was so impressed I haven’t used my regular oven to cook them since! The same is true for homemade french fries, if you are looking for a healthier alternative. 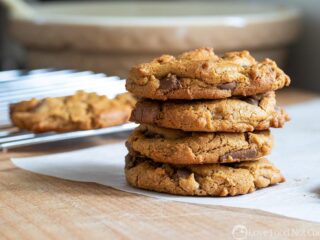 Hi, I’m Eliza, welcome to Love Food, Not Cooking! Here you’ll find dozens of quick and easy recipes for dinner, lunch, side dishes, and more. Our recipes use whole food ingredients, for quick delicious meals your family will love!